Well done to Seán Kelly on being awarded Galway Footballer of the Year for 2022.

Last month, Conor McKeon, in the Irish Independent, summarised the year Seán has had. (Seán has since won the Connacht Club Championship with Maigh Cuilinn)

There was admiration bordering on wonderment in Don Connellan’s voice when he considered the contribution of Seán Kelly to Moycullen’s Connacht club SFC semi-final win over Strokestown in Tuam Stadium on Sunday.

“The amount of work that man has got through,” he said before trailing off as if unable to quantify it in words.

On a day when Moycullen scored a single point in the entire second half and needed the relief of Kelly’s goal in extra-time to finally, belatedly, separate themselves from Strokestown, the Galway captain was everywhere.

Ball-carrier. Tackler. Energiser bunny. Punching holes and scoring goals on the type of day that, even for those watching, quickly sapped energy from both legs and minds.

January 30: After Seán Mulkerrin is ruled out for the season with a knee injury, Kelly starts the league as Pádraic Joyce’s new full-back.

February 16: Kelly keeps David Clifford scoreless from play as NUIG beat UL in the final of the Sigerson Cup, one of just two losses Kerry’s young prince has suffered all year.

March 20: Galway win promotion back to Division 1 with a big win in Derry. Kelly doesn’t get his hands on another trophy just yet, with Roscommon winning the Division 2 final.

May 29: Having earlier beaten Mayo in Castlebar, Galway win their first Connacht title in four years by dint of victory over Roscommon in Salthill.

June 26: After Armagh and Galway become embroiled in an unseemly broil at full-time in their All-Ireland quarter-final, Kelly is sent off by David Coldrick after coming back out for extra time. He is later cleared by the CCCC.

July 24: Kelly captains Galway to their first All-Ireland final in 21 years, where Clifford exacts his revenge and Kerry end their mini famine.

October 30: Another medal. Peter Cooke scores a goal four minutes from time to give Moycullen a one-point win over Salthill/Knocknacarra. It’s Moycullen’s second Galway SFC success in four years, but their first crack at Connacht after the 2020 provincial competitions were cancelled due to Covid.

December 4: The club will contest this year’s Connacht final against Tourlestrane in Pearse Stadium.

“It would take a little toll on the legs,” Kelly said on Sunday, downplaying the epic nature of his season to date.

“The heavy ground as well, we weren’t moving as freely as we would. It’s something we’re used to.

“It’s something we played in twice already this year, so we’re well used to it.

“We did lose a couple of bodies and it stretched our squad a little bit, but we have good depth and good strength in our squad, so thankfully, we made it work.”

Matches on consecutive Sundays probably didn’t help. And, as Kelly admitted, Moycullen possibly read too much into their own performance against Westport a week previous.

“First time in Connacht,” he pointed out. “We knew it was going to be tough. We probably expected a bit more from Westport, but it was their first time winning the county championship, so maybe the celebrations went on a little bit.

“We kind of blew them away and maybe we got carried away a little bit.

“But every team you face is going to be a tough team. It’s winter football now. So it’s just grind it out, grind it out.” Eoin McGuire is Galway Minor Player of the Year U6 Boys Finish Their Season with Maigh Cuilinn 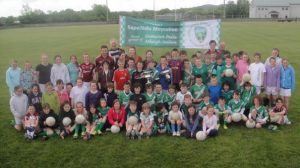 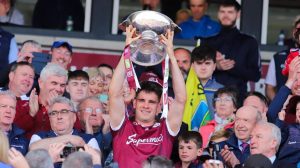